Hello and welcome to the last of four 6 in 60s for BEDA! Last week I talked all about the kidneys and for this last organ we’re moving not too far away to the pancreas.

That’s it for this blog, see you all tomorrow!

Hello and welcome to the third of four 6 in 60s for BEDA! We started with the skin, then last week we looked at the pineal gland. This week we’re looking at the kidneys!

See you all tomorrow!

For those who aren’t familiar with some very very poor french the title reads Weird Humans – Foreign Accent Syndrome.

See what I did there!

Foreign accent syndrome (FAS) is a weird and rare medical condition where patients develop speech patterns associated with foreign accents. It was first described in 1907 by neurologist Pierre Marie and it is such a strange condition that the accent can be from somewhere that the patient has never even visited! This rare disorder typically comes about as a side effect following stroke or other brain injury. The person with the condition not only changes the tone of voice, but will also change tongue placement during speech.

FAS has been documented in cases around the world, including accent changes from Japanese to Korean, British English to French, American-English to British English, and Spanish to Hungarian.

Some common speech changes associated with FAS include:

Here is a rather strange case study reported by the BBC:

Hello and welcome to the second of four weekly scientists. Last week I spoke about the wonders of vaccination and Louis Pasteur’s discoveries. I thought for this week I would go along the same theme and introduce you to the father of immunology!

As I said last week vaccinations have saved countless lives and are an essential part of modern day medicine. Edward Jenner worked in small rural community where most patients were farmers who owned cattle. During this time, smallpox was a common illness and among the major causes of death. In 1788, a smallpox epidemic hit Gloucestershire. During the outbreak, Edward Jenner observed that some patients who were working with the cattle and had also had contacted cowpox never got affected by the smallpox virus. In May of 1796, Jenner was  given an opportunity when one young milkmaid came to see with some blister-like sores on both hands. Jenner was able to identify that the young lady had caught cowpox due to the fact that she handled cows every day. He extracted some liquid from sores of the patient with cowpox. He later used this liquid on a young healthy man. To Jenner’s relief, the young man never caught smallpox, unlike other people. This then led to the smallpox vaccine.  In 1798, after several other successful tests, Jenner finally published his findings in a publication called An Inquiry into Causes plus the Effects of Variolae Vaccine. He called his idea “vaccination,” from vaccinia, which is a Latin word for cowpox. After so much ridicule, other doctors finally found out that the vaccination really worked and by 1800, a large number of them were using it.

So all in all thanks to Jenner’s discoveries and the immunology work done today many diseases are being wiped out around the world.

Hello and welcome to the second of four 6 in 60s for BEDA! Last week I talked all about the largest organ of the human body, the skin. This week we are talking about the smallest, the pineal gland.

That’s it for this blog, see you all tomorrow!

Hello and welcome to the first of four weekly scientists. We wouldn’t understand how the human body works without these scientists and many of their discoveries have enabled us to live for longer!

Noted for: helped resolve the mysteries of several deadly diseases like chicken cholera, anthrax, rabies and silkworm diseases. He also contributed to the development of the very first vaccines.

Vaccinations have saved thousands upon thousands of lives. Pasteur created vaccinations for some of the most horrendous diseases.

Pasteur’s first vaccine discovery was in 1879 with a contagious disease called chicken-cholera. After unexpectedly exposing chickens to the weakened form of a disease, he proved that they became immune to the actual virus. Pasteur continued to extend his “germ theory” to formulate vaccinations for various diseases including anthrax, smallpox and cholera.

In 1882, Pasteur made a decision to emphasize his efforts and research on the subject of rabies disease which was proven to attack the central nervous system. In 1885, he vaccinated Joseph Meister, a nine-year-old boy who had previously been bitten 14 times by a rabid dog. The effective results of Pasteur’s vaccine for rabies brought him instant fame. This set off a worldwide fundraising campaign to construct the Pasteur Institute in Paris, France, which was inaugurated on November 14, 1888.

Cheers Louis for saving me from the horrors of cholera, smallpox and anthrax!

Hello and welcome to day 6 of BEDA. So far so good right?

On Fridays I’m going to be talking about genetics, it’s a massive field in the world of biology. Therefore, I’m going to try and break it down and keep things light and simple! My apologies to any geneticists out there!

So I’ll start with a simple question, why are my eyes brown, or hazel or blue?

The leading question to that is whats a gene? and what does inherited mean?

A gene is a chunk of DNA, that DNA works as an instruction manual for the body to make you you! So each gene codes for a different thing and there is a gene specifically for your eye colour. Genes are broken into dominant and recessive genes. The dominant ones are more likely to occur and the recessive ones are less likely to occur.

So whats the gene for eye colour?

On your 15th chromosome you have two genes located very close together: OCA2 and HERC2. These genes can create the proteins required to make up the eye.

What makes my eye the colour that it is then?

A person’s eye color results from pigmentation of a structure called the iris, which surrounds the small black hole in the center of the eye (the pupil) and helps control how much light can enter the eye. The color of the iris ranges on a continuum from very light blue to dark brown. The protein produced from the OCA2 gene, known as the P protein, is involved in the maturation of melanosomes, which are cellular structures that produce and store melanin. The P protein therefore plays a crucial role in the amount and quality of melanin that is present in the iris. Several common variations (polymorphisms) in the OCA2 gene reduce the amount of functional P protein that is produced. Less P protein means that less melanin is present in the iris, leading to blue eyes instead of brown in people with a polymorphism in this gene.

What does that have to do with my mother and father?

Each of these two genes comes in two different versions (the dominant and recessive versions we spoke about earlier). The genes come in a brown (dark) and a blue (light) version. Dependent on which your parents have determine which genes are expressed in your eyes. Where brown or dark versions of the gene are more dominant.

It is but these two genes have to work together to produce the darker colour, if any of the 2 genes are in the “off position” which is the blue colour then you can end up with lighter eyes. Shown below:

So can you predict a babys eye colour?

Yes you can but there is always an element of chance:

I hope this didn’t get too confusing! Let me know if you have any questions in the comments!

Hello and welcome to the first of four disease profiles. I’ll be giving you the top information on each disease, be warned for potentially slightly gross images.

Type: This is one of five viruses from the genus  Ebolavirus. (Sounds too good to be true but scientists love literal names).

Symptoms: (From WHO): The incubation period, that is, the time interval from infection with the virus to onset of symptoms is 2 to 21 days. Humans are not infectious until they develop symptoms. First symptoms are the sudden onset of fever fatigue, muscle pain, headache and sore throat. This is followed by vomiting, diarrhoea, rash, symptoms of impaired kidney and liver function, and in some cases, both internal and external bleeding (e.g. oozing from the gums, blood in the stools). Laboratory findings include low white blood cell and platelet counts and elevated liver enzymes.

Spread: The Ebola virus is spread in the blood, body fluids or organs of a person or animal with the infection. 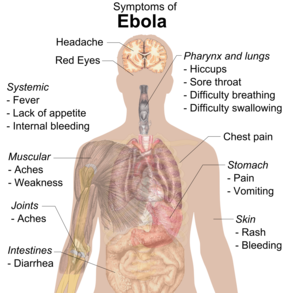 Treatments: (From WHO) Supportive care-rehydration with oral or intravenous fluids- and treatment of specific symptoms, improves survival. There is as yet no proven treatment available for EVD. However, a range of potential treatments including blood products, immune therapies and drug therapies are currently being evaluated.

An experimental Ebola vaccine proved highly protective against the deadly virus in a major trial in Guinea. The vaccine, called rVSV-ZEBOV, was studied in a trial involving 11 841 people during 2015. Among the 5837 people who received the vaccine, no Ebola cases were recorded 10 days or more after vaccination. In comparison, there were 23 cases 10 days or more after vaccination among those who did not receive the vaccine.

Location/ History: The largest outbreak of Ebola occurred in 2014-15 in many African countries where there was around 11,000 deaths and 28,000 cases.

Hello and welcome to day 4 of BEDA!

So every Wednesday in BEDA we are going from Birth to life to death as humans (Human 101 if you will) but to start off the series we’re going to try and break human evolution down into simple stages.

Human evolution is basically the process that took us from being apelike creatures to the humans we see today. Scientific evidence shows that the physical and behavioral traits shared by all people originated from apelike ancestors and evolved over a period of approximately six million years. The process of evolution involves a series of natural changes that cause species to arise, adapt to the environment, and become extinct. All species or organisms have originated through the process of biological evolution.

One of the key features of humans evolving include bipedalism which is a fancy word for walking on two legs. This is unlike the apes that use all four limbs to get around. It is not truly known what first caused early humans to get up and walk like this but there are a few theories. These theories include that humans that walked on two feet could gather more food and were therefore more successful, others have suggested that this method of movement allowed early humans to use tools more successfully. However the truth is simply not known.

Other traits include the ability for humans to use tools, a large and complex brain and the ability to use language.

Hello and welcome to the first of four 6 in 60s for BEDA! I once did a month of organ related 6 in 60s which you can find here. So I’m back to bring you another four! Today we’re starting off with the largest organ the skin!