Hello and welcome to the second of four disease profiles. I’ll be giving you the top information on each disease. Today we’re looking at a disease that in the vast history of medicine has become a recent issue. It was once referred to as GRID and the 4H disease. It wasn’t until 1982 it was officially termed HIV/AIDS. It’s a disease with quite a complex history and effects many on a daily basis.

Type: HIV is a viral infection and AIDs is the set of symptoms/syndrome caused by HIV. AIDS is the last stage of HIV, when the infection is very advanced, and if left untreated will lead to death. 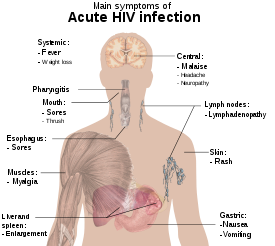 Transmission: HIV is transmitted by three main routes: sexual contact, significant exposure to infected body fluids or tissues, and from mother to child during pregnancy, delivery, or breastfeeding (known as vertical transmission). There is no risk of acquiring HIV if exposed to feces, nasal secretions, saliva, sputum, sweat, tears, urine, or vomit unless these are contaminated with blood.

Treatments: Currently there is no cure for HIV however with the right treatment and support, people with HIV can live long and healthy lives. Currently highly active antiretroviral therapy is a key treatment for those living with HIV which slows progression of the disease.

History: Both HIV-1 and HIV-2 are believed to have originated in non-human primates in West-central Africa and were transferred to humans in the early 20th century. The earliest well-documented case of HIV in a human dates back to 1959 in the Congo. The earliest retrospectively described case of AIDS is believed to have been in Norway beginning in 1966. However AIDS was first clinically observed in 1981 in the United States. There were a handful of cases with the main link being that they were gay men who were injecting drug users. The disease then became strongly linked with gay men, hense the name GRID ( gay-related immune deficiency) however once AIDS was discovered not to be simply linked with gay men the name was changed.